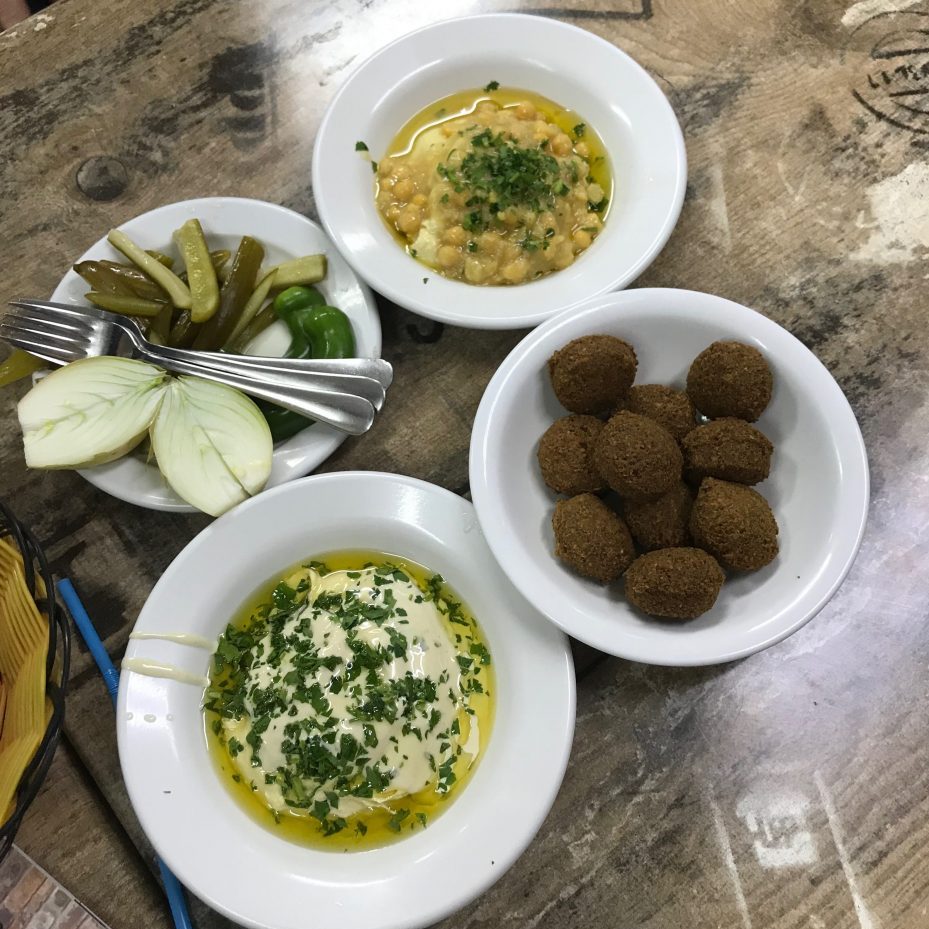 If what they say about Israel becoming an international culinary destination is true, the logical extension is that Tel Aviv is a foodies Olympus. Don’t think that the city is all about upscale restaurants and chefs with international reputations, of which there are plenty. Tel Avivians spend a lot of time outdoors, and much of the city’s gastronomy goes down on, or at least near, the street.

Our inclusive definition of Israeli street food ranges from a little something in a pita to quickie items (but not fast food, perish the thought, or complete meals) served at tables spread into the street. That runs from Israeli and Middle Eastern classics like hummus and falafel, shuarma and shakshuka, all the way to international specialties once considered too exotic for the Israeli palate. In Tel Aviv’s Carmel Market, for instance, shoppers pass — or stop at — stalls selling traditional produce and shmattes, stands offering arepas wraps from Venezuela, Mexican tacos, dim sum dumplings and an Asian woman cooking Thai specialties.

Noblesse obliges. Any survey of Tel Aviv’s top street food must start with the classics, in this case hummus. 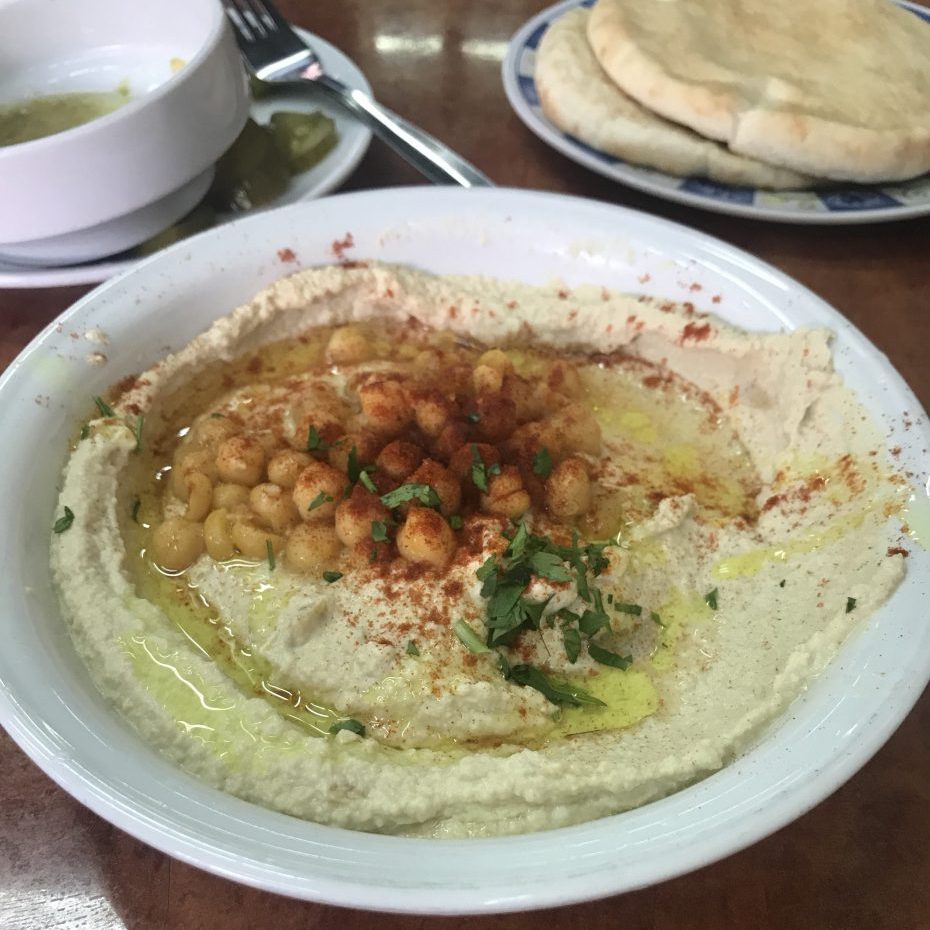 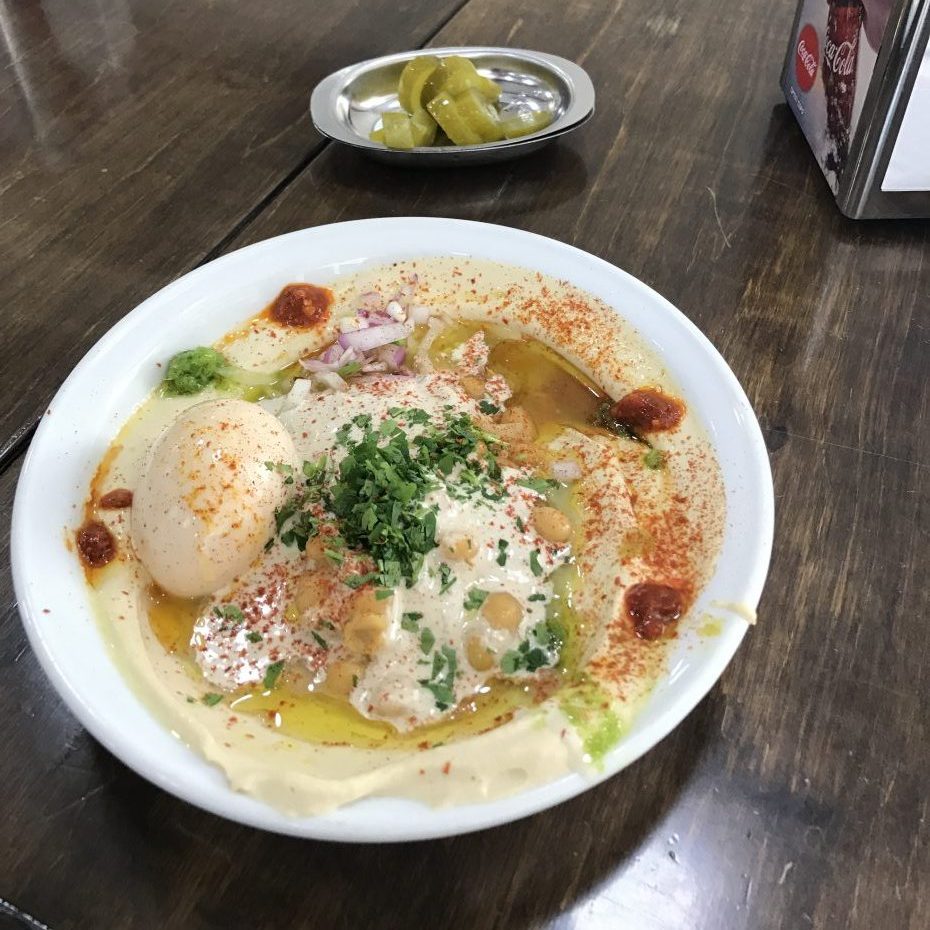 Traditionalists say chickpeas in the finest hummus have been crushed by hand in a wooden mortar and pestle, blended with tahini (tehina), minced garlic, olive oil and maybe a pinch of cumin till it’s smooth and creamy. Everyone has his or her own favorite Tel Aviv hummus joint, but a majority will concede that Ali Karavan, also known as Abu Hassan, is one of the very best. The crowds lining up outside Its two locations opposite each other block the sidewalks and jam traffic on Shivtei Yisrael Street in Jaffa (there’s also a third, on Dolfin Street); many come for its famous masabaha, a delicious variation on the basic hummus theme containing whole chickpeas.

Many other Tel Aviv places contend for the throne. Among them: are Ashkara on Yirmiyahu Street in North Tel Aviv, where the hummus has a rep for being less spicy; Mashawsha on Pinsker Street, specializing in a chunkier chickpea paste from the Galilee, and Shlomo and Doron, one of many popular hummus emporia in Kerem Hateimanim, the old Yemenite quarter just north of the Carmel Market.

Hummus may be wiped from a plate with a chunk of pita or jammed into the pocket of Middle Eastern bread with salad, a healthy dose of hot sauce, maybe some pickles and chips (aka fries). Falafel, its near relative (deep-fried balls of those same ground chickpeas) is quintessentially street food. Though the number of falafel stands around town decreased as Tel Avivians drifted away to nibble on things that they consider more upscale, there are still plenty of purveyors of this Israeli classic. Everyone who hasn’t defected to sushi, pizza and the like has their own choice. But things change: The other day we went back to check on a favorite, a tiny stand on Hacarmel Street at the western end of the Carmel Market, and were dismayed to see that it had been replaced by another of the innumerable shops selling mobile phones and accessories. 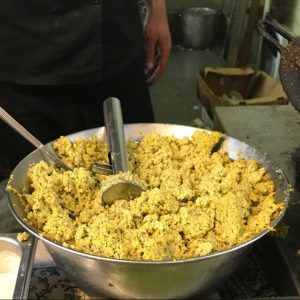 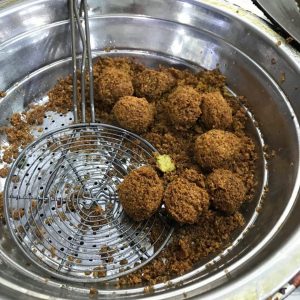 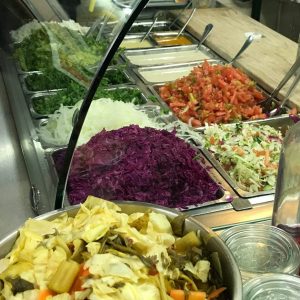 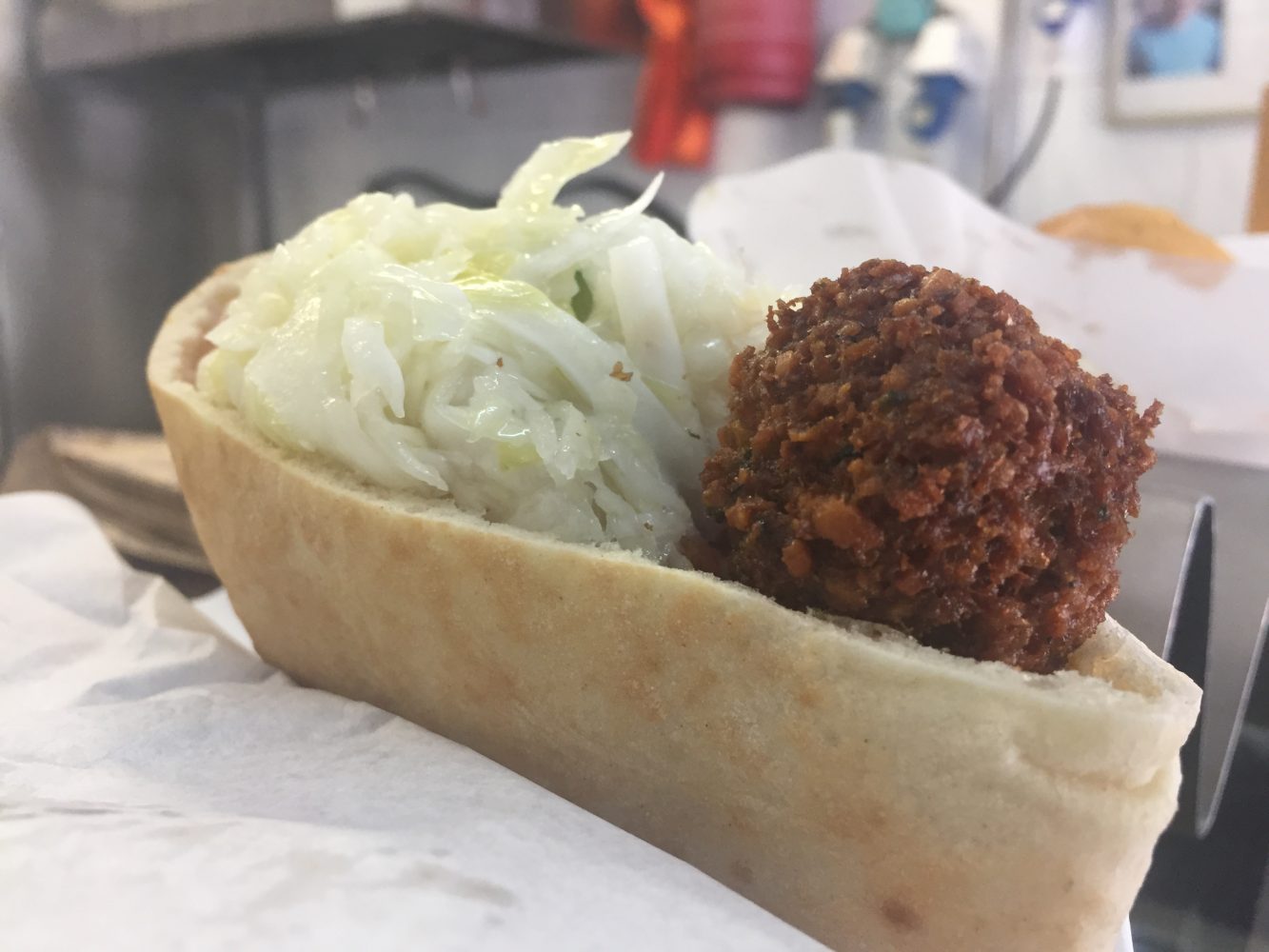 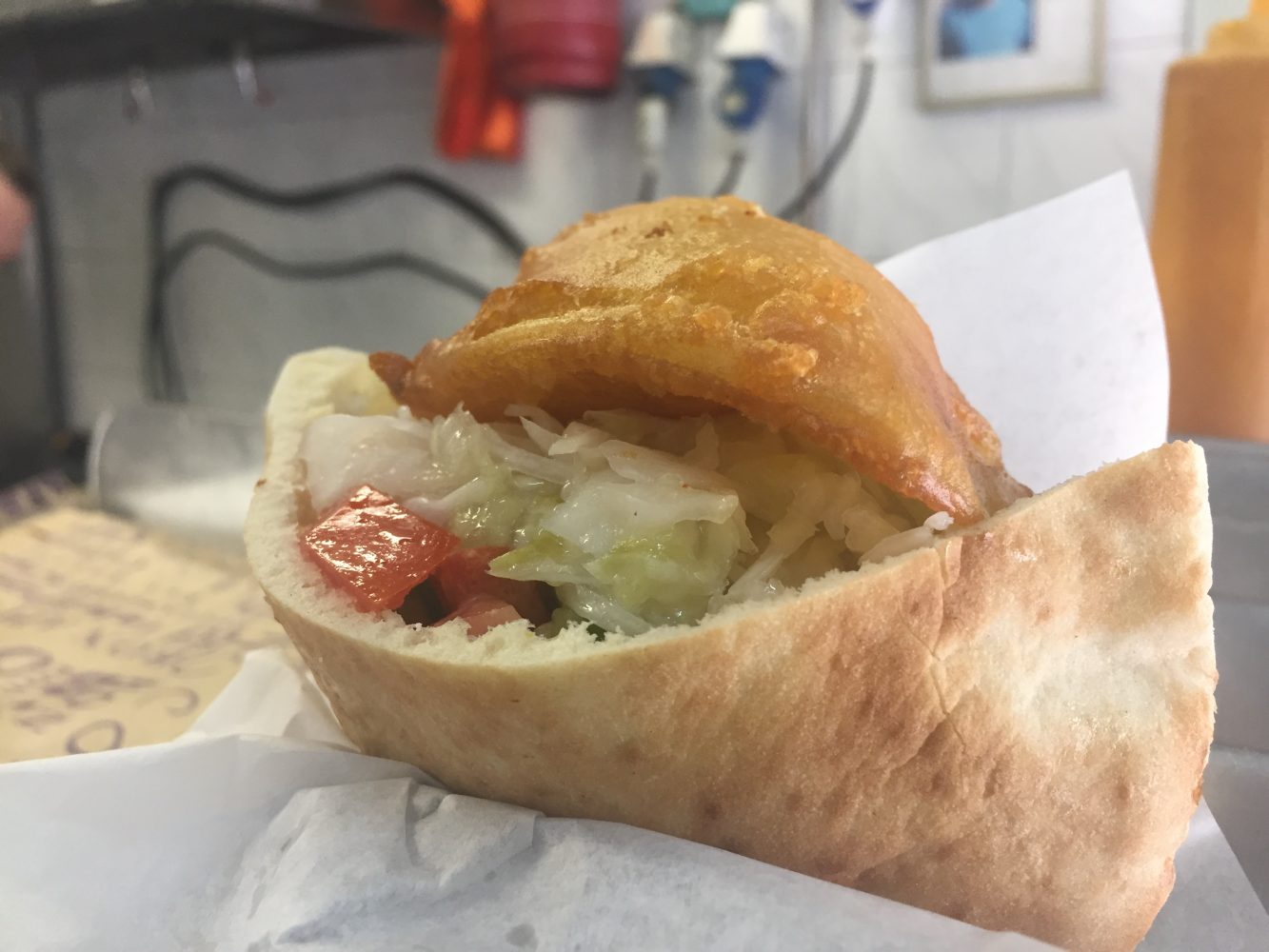 The falafel basics are pretty much the same everywhere — deep-fried balls of crushed chickpeas, spiced with garlic and cumin and maybe something else; stuck inside the pocket of a pita or wrapped in a large flat laffa bread, spread inside with a touch of hummus; finely chopped salad, sometimes tomato and cucumber, but often with cabbage as well; and an optional dollop of a spicy spread, usually characterized as “harif” which means hot; topped off with a splash of tehina, Some stands offer a small spread of add-it-yourself extras — grilled hot peppers, pickled cucumbers and/or lemon slices, home-made tomato salsa and mango-based amba sauce on a side table. Fries are added as well. Falafel Itzik, an unprepossessing stand at 90 Jerusalem Boulevard in Jaffa, they’re potato sections fried until puffy rather than the conventional “chips.”

Some other choices. Hakosem (The Magician), on Shlomo Hameleh Street just off King George, packed with people packing in their falafel made with chickpeas brought in from Spain. Down King George in the direction of the Carmel Market, Ratzon can be identified by the long lines of customers attracted by what’s in the pita and the price, the cheapest in Town. It’s worth standing in line at Tadmor, on Salame Street in South Tel Aviv, and Hippo, on Ibn Gabirol, where the chickpeas are organic and the pita comes in either traditional white or whole wheat. 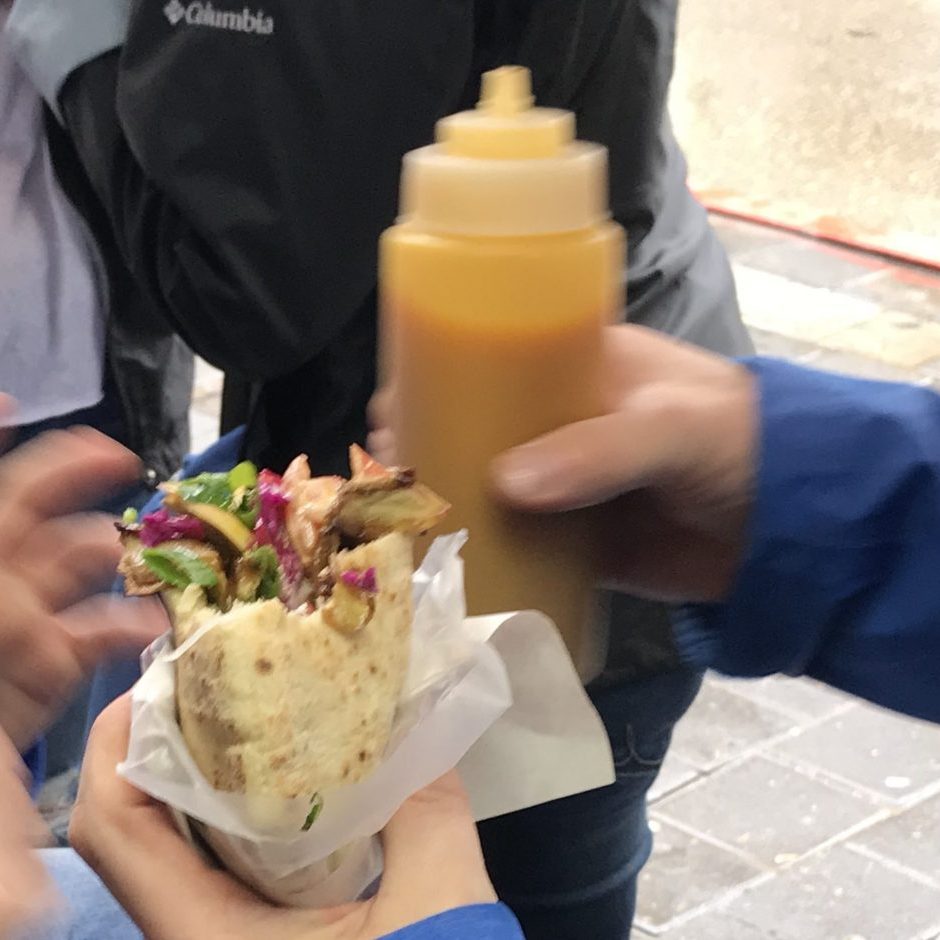 Falafel isn’t the only thing that can be shoved into a pita. Another variation on the theme is sabih, in which deep-fried eggplant is joined by hard-cooked egg, chopped salad, tehina and amba. Unlike other street foods which originated abroad, sabih is reputed to be native to Tel Aviv, named for the Jewish immigrant from Iraq who first assembled it. Or that it, stems from “sabah,” Arabic for morning. Cognoscenti insist that the eggs in a proper sabih should be “haminados,” slow-cooked in “hamin,” the Mizrahi Jewish version of what Ashkenazis know as cholent. 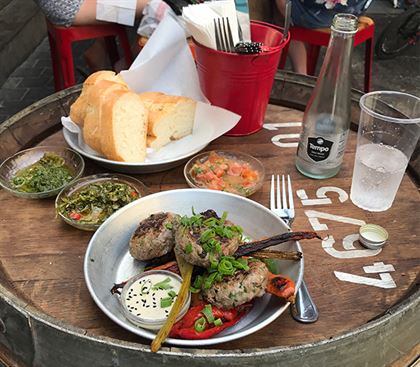 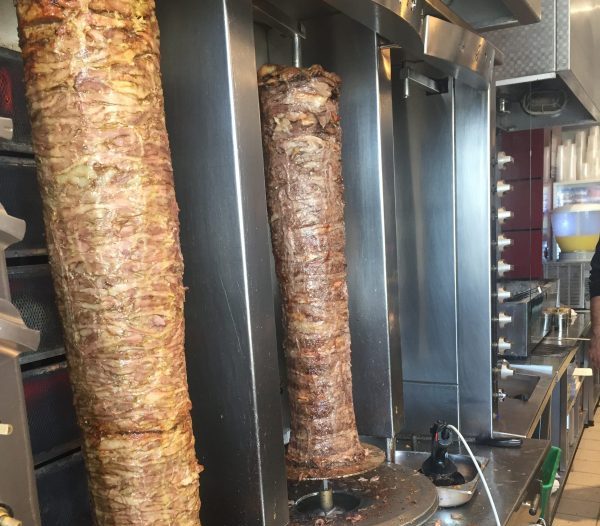 And then there’s shawarma, where a large quantity of meat is grilled on a rotating vertical split and sliced off for each customer, shishlik of beef, lamb or chicken, and kebab, ground meat on a skewer cooked over hot coals before its encounter with salad, tehina and other fixings inside a conventional pita or rolled-up laffa flatbread. The proprietor of Bar Ochel (Food Bar) in the Carmel Market, claims to have Tel Aviv’s best kebab in Tel Aviv, though there are rivals, among them Shmuel’s, near the Allenby Street end of the market, and Shaul’s or another restaurant in the Hatikva Quarter specializing in “on the fire” (al ha’esh in Hebrew). Someone in the know, a local or a tour guide, will have their own favorites. Still want a list of likely nominees? Try Avazi or one of the other grill spots along Etzel Street in the Hatikva Quarter, Lev Harahav in the Yemenite Quarter, Itzik Hagadol in Jaffa, and Pinat Hashlosha on Ben Zvi road on the southern end of town. Eaten at a table or taken away in a pita, it’s a treat either way.

Our next item is the savory stuffed pastries known as burekas, which are both portable and popular; they can be bought by the piece or by the kilogram in bakeries and supermarkets, served in cafes or made at home according to family recipes. 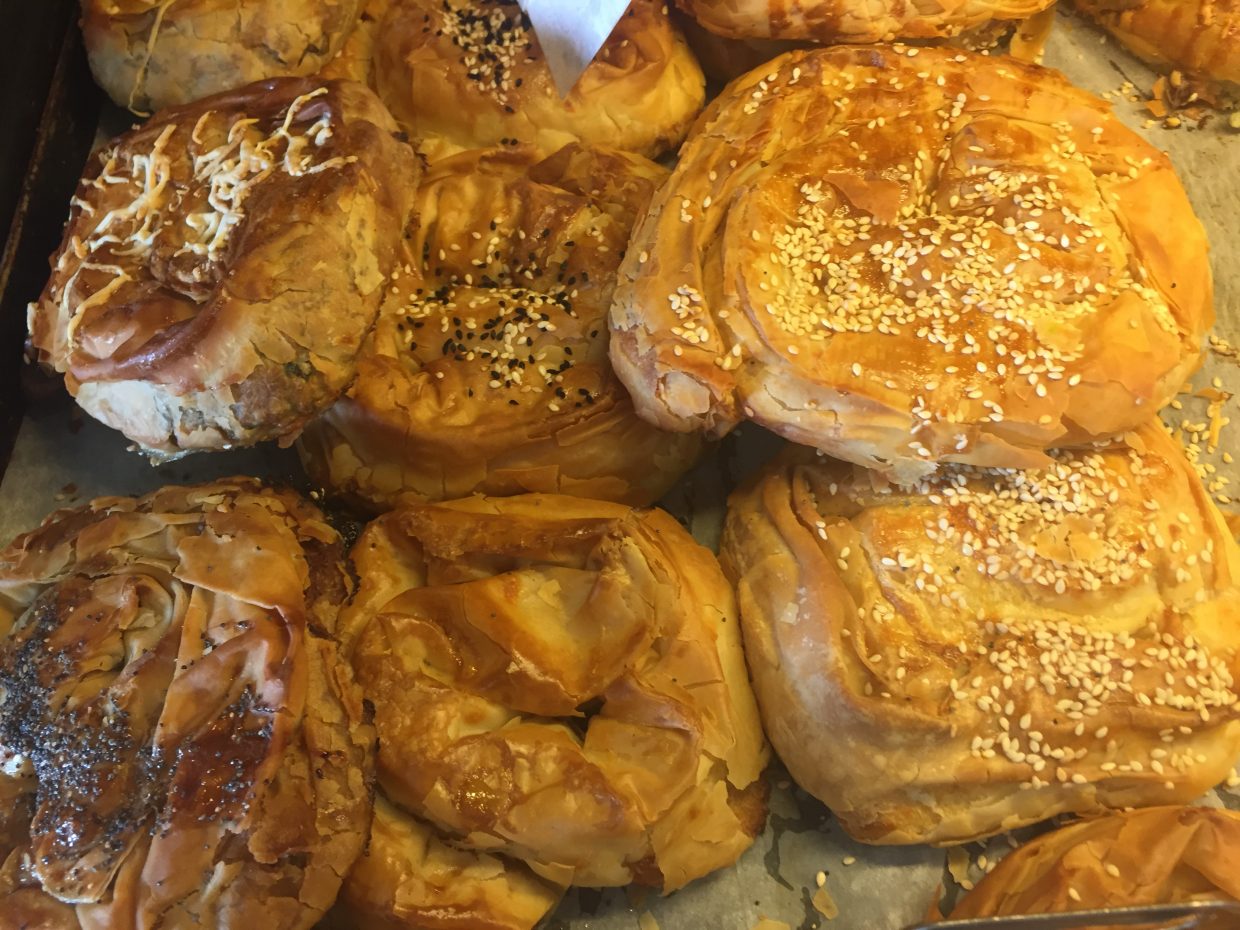 Burekas are closely related to the Turkish bourek similar pastries from Greece, and come in triangle-shaped pastries made with thin layers of flaky philo-type pastry, and Sephardi burkekas, half-circular pockets of a crumblier pastry said to resemble the empanada their ancestors brought with them into exile from Spain in 1492. Most popular, and most traditional, are fillings salty semi-hard Bulgarian or feta-style cheese, spinach, and a combination of the two, to which local bakers have added roasted eggplant, ground meat, potatoes or mushrooms.

Jaffa, which absorbed large numbers of immigrants from the Balkans in the years after independence, is generally regarded as the epicenter of Tel Aviv bureka culture; close to a dozen bureka stands can be found along a short stretch of Jaffa’s Jerusalem Boulevard, and at Leon’s burekas just around the corner on Olei Zion. Which makes it somewhat surprising that one fishmonger whose shop is just up the street tells us that he rides across town every Friday morning to pick up a boxful of burekas from Amikam’s in Ibn Gabirol Street. Others swear by a couple of places in the Levinsky market area, and in Florentin, the neighborhood founded by immigrants from Salonicki, Greece, in the 1920s.

Some mavens insist that burekas should be accompanied by a hard-boiled egg, others say the experience isn’t complete without a little spicy salsa on the side. Either way, there’s no questioning their cultural authenticity, not to speak of their delicious flavor! 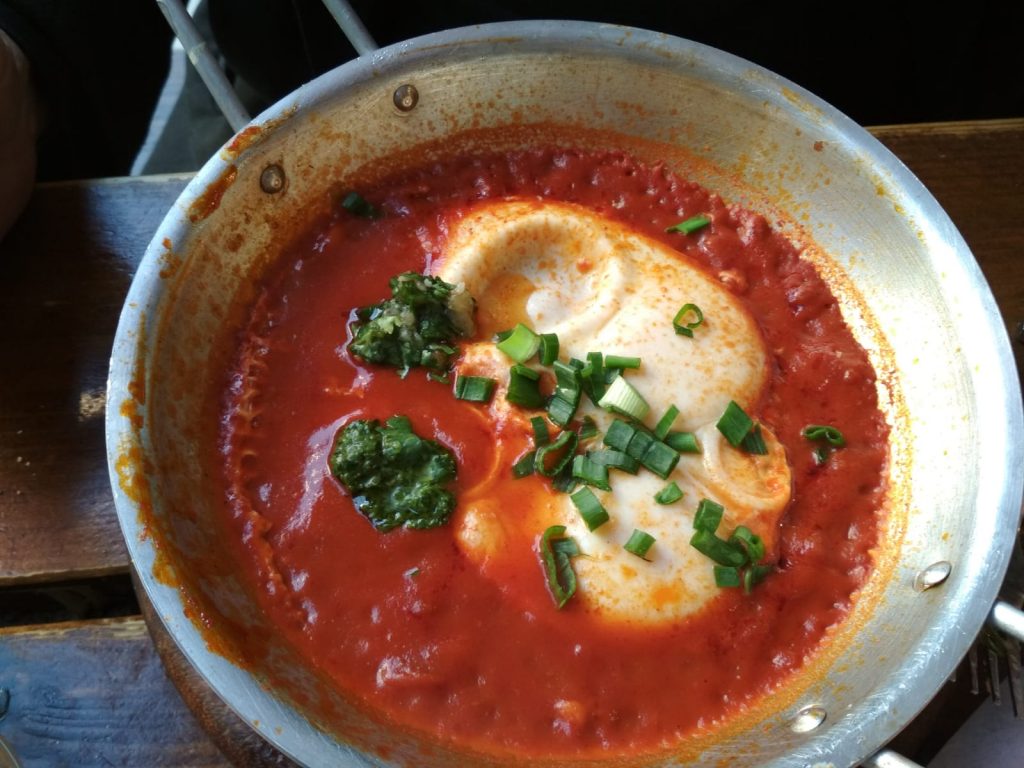 Shakshuka, the final item on our menu, lacks the portability, a central characteristic of street food. In theory, it’s possible to shove shakshuka into the pocket of a pita, though the classic presentation of eggs poached in a spicy sauce of tomato, chili pepper, onion and spices, usually including cumin, is in an iron pan right off the fire. Portable or not, shakshuka just feels like it fits due to its universality.

You’re unlikely to find anyone actually eating shakshuka on the street, the dish of eggs poached in a spicy sauce of tomato, onion and chili pepper is quickly prepared, informal, relatively inexpensive and accepted as a staple in the local diet.
You’ll find shakshuka everywhere — at small eateries in open-air produce markets like Tel Aviv’s Carmel or the Hatikva Quarter, modest neighborhood coffee shops and breakfast or lunchtime menus of places slightly higher up the restaurant food chain — and in embellishments on the basic theme with salty white cheese, North African-style merguez sausages, or a green variation where the tomato has been banished in favor of spinach, fresh herbs and other veggies. And there’s always the option of turning up the heat by tossing in a dollop of skhug, a paste of peppers and herbs for which many spots have their own secret recipes.

There’s no arguing with shakshuka’s place in Israeli cuisine. Its origins, however, are a different matter. Some swear that it was brought to Israel by immigrants from Tunisia, others on Ottoman Turkey or Yemen. Pretty much everyone agrees that the best shakshuka comes to the table in the iron pan it was cooked in, and that the sauce should be wiped up with the simplest kind of bread.

If shakshuka can be found almost everywhere, it’s the specialty of the house at Dr. Shakshouka near the Jaffa Clock Tower. The good doctor, whose real name is Bino Gabso, has other items on his menu. But it’s the various takes on shakshuka, with Libyan-style sausages, white cheese, even a vegan version, served on tables in the alleyway just outside the restaurant proper that qualifies as authentic street food.

No visit to Israel is complete without a taste of some of these street food wonders, and with so many places offering these favorites, we can honestly say it is rare to experience a miss. Eat and enjoy!