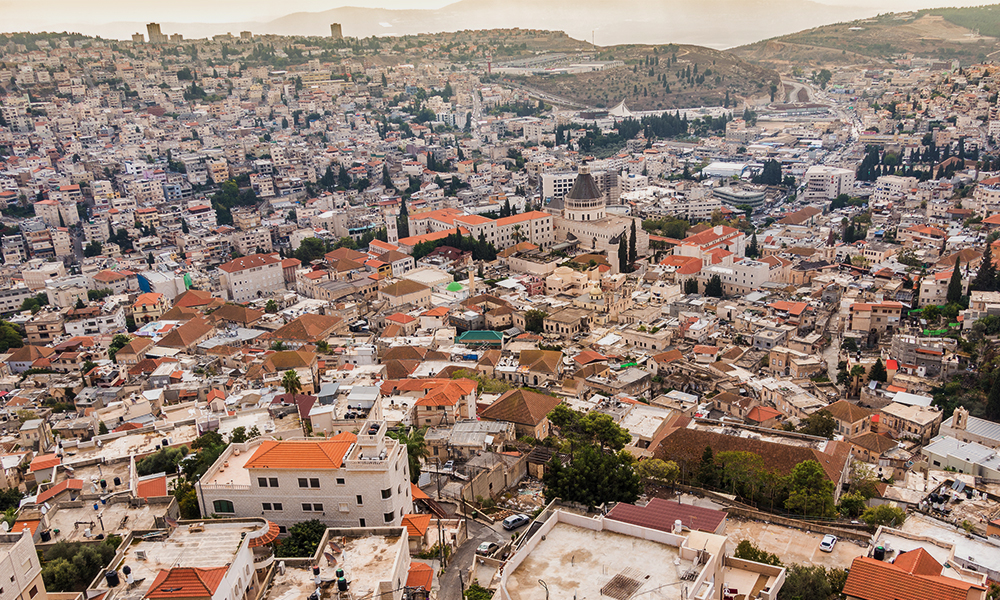 Nazareth – a city that will surprise you

Visitors to Nazareth, which most people associate with Christianity, may be surprised to find out that the majority of the town’s residents are Muslims. That’s not the only surprise you’ll have on a visit to this fascinating Galilee city.

Matter of fact, Christians are the third largest religious grouping in the total combined population of about 110,000 in Nazareth and its siamese twin, Upper Nazareth – about 50,000 Muslims, 20,000 Christians and 40,000 Jews in Upper Nazareth. The mixed nature of its population of the metropolitan area, however, doesn’t stop many from regarding Nazareth as the Arab capital of Israel.

And indeed the city, located on a hilltop that’s been inhabited since the time of the Canaanites, if not earlier, has a distinct flavor that contrasts it from other urban localities. The sound of Christian church bells and Muslim muezzin, the aroma of freshly roasted coffee, exotic spices and meat on the grill, the honking of car horns and chaotic traffic jams combine to it perfectly clear to visitors that they’re in the Middle East.

Obviously, much of what attracts foreign visitors to Nazareth is associated with Christianity and Christian history. For starters there’s the Roman Catholic Church of the Annunciation, where tradition has it is where the Angel Gabriel announced the upcoming birth of Jesus to his mom, the Virgin Mary. The church that’s currently on the site is modern, built in the late 1960s. But there’s evidence that churches have existed on this spot for the best part of 1,800 years. The original sanctuary, built it the 3rd century, was replaced about a century later by another, constructed on the orders of the Empress Helena. The mother of Byzantine Emperor Constantine the Great, Helena, a serial searcher who visited the Holy Land in search of religious sites, also discovered the spot in Jerusalem where she commanded that Church of the Holy Sepulcher be built. Helena’s Nazareth church subsequetly was razed by the Persians, rebuilt a few centuries later by the Crusaders, razed by Egyptian Mamluks, built yet again a couple of centuries later by the Franciscans and then taken down, peacefully for a change, to make way for the current structure. Remains of those earlier churches can be seen in the Grotto of the modern basilica.

While you’re in the neighborhood, you might also stop for a moment at the Synagogue Church, a sanctuary with the words the synagogue embedded over its doorway and built over what are believed to be where the young Jesus prayed 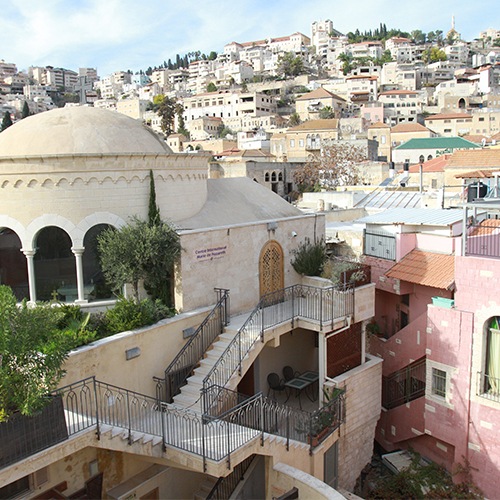 It’s a mistake, however, to view churches as Nazareth’s only historical sites. You and the kids can regale friends and family back home with graphic descriptions of how you clambered and crawled your way through the almost perfectly preserved remains of Roman bathhouse, nearly identical to ones found in Pompeii, discovered by Elias and Martina during renovations of their shop in 1993. Or tell how you projected yourselves back to ancient times at Nazareth Village, a modern reconstruction of how locals lived two millennia ago, complete with costumed “villagers” and replicas of structures built with what the proprietors say are the same methods, and implements, that would have been used by Joseph the Carpenter.

More recent, but still old, are the magnificent homes in the area built during the era of the Ottoman Turks, who ruled these parts for about 500 years. Many have beautiful frescoes, painted plaster walls and ceilings that are surprisingly well preserved though not in the same condition as when they were commissioned by wealthy merchants. A good example of the architecture, if not the frescoes themselves, can be found at the AlReda restaurant on Bishara Street, not far from the Old City.

Don’t dare leave Nazareth without spending some time in the souk (Arabic for market), located directly north of the basilica, which offers an authentic shopping experience that’s worlds apart from the air-conditioned malls dotting the country. An experienced guide can navigate your way through the bazaar as you brush elbows, and maybe more, along the narrow streets and crowded alleyways, pointing out where it’s best to stop now and then to sniff the fresh-ground spices, scan the fresh produce brought to town by farmers from the countryside, peer into shops selling just about everything you can imagine, not just religious items and souvenirs. Exotic garments and embroidered fabric, some from other parts of the Middle East. Scarves and drums, toys and kitchen implements, silverware, sweets and pastries including rahat lokum, which you may know as Turkish delight, baklava, fried balls of yeast dough in sugar and rosewater syrup called awama, knafe from angel-hair pastry, cheese and sugar syrup, and fresh-ground coffee pungent with the aroma of cardamom (“hel” in Arabic). Mix in the stalls of tradesmen, from tailors to knife sharpeners, and discover that souk s fascinating and special because its mix of tourists with locals from Nazareth and the surrounding region shopping and living their daily lives. 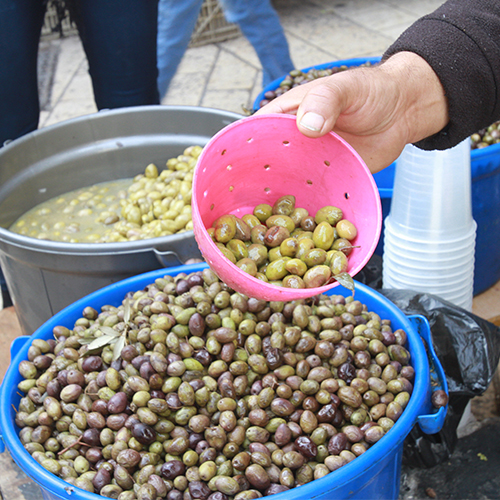 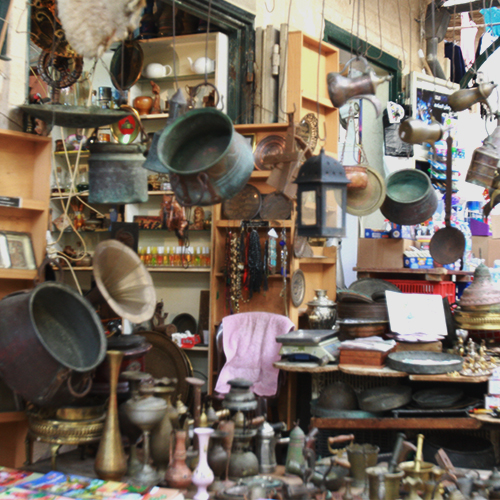 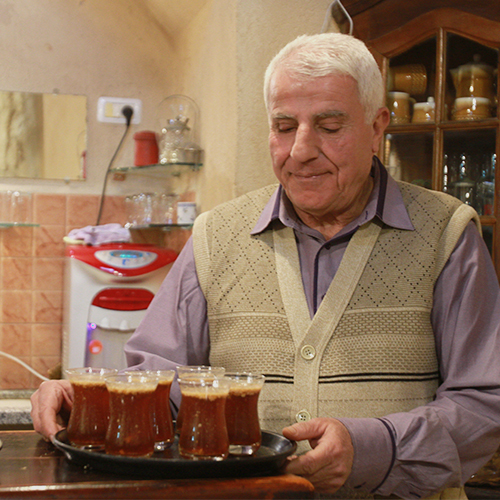 Getting a taste of Nazareth inevitably involves the taste buds as well. Everyone has his or her own favorite among the dozens of establishments offering traditional falafel and hummus, the best of which is ground by hand with a mortar and pestle instead of being whizzed in a machine. The same is true of coffee shops, many of which have gone modern and serve espresso and cappuccino, though locals and other traditionalists still prefer the tiny cups of old-style Turkish (known as Greek in other parts) coffee boiled over an open flame. In either case, you can be sure the coffee is fresh-ground and tantalizingly fragrant. (Starbucks will never feel the same afterwards.)

For those without restrictions on what they can eat, Nazareth has become famous for its restaurants, many of which offer well-known, familiar dishes and contemporary creations by a new generation of Arab chefs. Among the best known are Diana, famous for its kebab (watching the chef chop meat, pine nuts and herbs for the kebab with a huge scimitar-shaped knife is a tourist attraction all on its own) is joined on the menu by seasonal dishes featuring wild spinach or okra when in season. Another is Tishreen, specializing in both Arab cuisine including siniyeh and roasted baladi eggplant and European-style carpaccio, cordon bleu and pasta dishes.

The bottom line: Nazareth is a fun place to visit, a holiday for your senses and the raw material of stories to be told and retold.